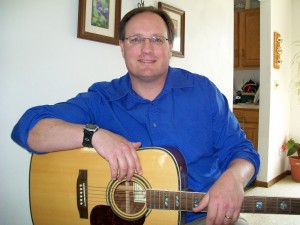 Kevin Tye had never made a professional product with his music.  With the help of Studio Pros, he’s now taken his passion to the next level.

Kevin Tye has quite a bit of musical experience–he played in local bands for almost a quarter century. Eventually he moved on to writing his own material, taking advantage of the fact that he could set up a home studio very easily with today’s computer recording options. These days, he writes and records songs in his spare time when he’s not a this full-time job as a teacher. “I do it as a passion,” he says. “I just like to create things.” But until recently, he had never attempted to make a fully professional recording of his music.

Tye writes in multiple styles and genres, but as of late he has been focusing his creative efforts mainly on writing country songs. He saw an ad for Studio Pros in a magazine. “I decided I would give it a try,” he remembers, “to see what one of my songs would sound like through a professional studio.”

“I was a bit unsure exactly how it was all gonna play out,” he admits. But Tye’s confidence grew with each step of the recording process with Studio Pros; it started with a song sketch and built from there, while he gave his input on each of the tracks as he heard them. He was particularly interested in hearing the musical direction his songs would take by letting Studio Pros’ session musicians make their own decisions. “I wanted to see what the choices would be for people who are doing this thing day in and day out,” he explains. Then, giving more of his own feedback as the process went on, Tye struck a balance that he felt optimized his songs. “In the end I think it was a good mix of musical choices. For example, the singer did some slightly different things in the vocal than I had done, which I ended up liking quite a bit. So it was kind of that process where I was just feeling it out at first, then giving more input at the very end stages.”

During the production, Tye was impressed that the musicians could record parts without hearing the final vocal track and still make them work. “We started with all the backing tracks, and the thing I was most surprised with was that the guitar player could lay down a track, and in the end it fit really, really well,” he says. “These guys could come in and put their parts down without the final vocals, but in the end it all fit together really nicely.”

It was liberating for Tye to break free from the restrictions of recording everything himself. “In my studio I’m doing all the instruments, and I’m definitely not an expert on all of them,” he says. “So a lot of the choices I make musically are based on what I can do technically rather than what might sound good to someone who does this for a living. What I was most happy about was that everyone was able to come in, all experts at their instrumentation, and they made choices that ended up having a lot more complexity than stuff I would have been able to do myself.”

Tye is hoping to submit his new recordings to songwriting competitions and shop them around to try to get placements in film and TV. “I’m gonna see how much success I can have with these songs,” he says. “I’ve enjoyed the process, working with professional level musicians. It was a great experience being able to go from sitting down with my guitar to working with them to develop the song into what it is now.”