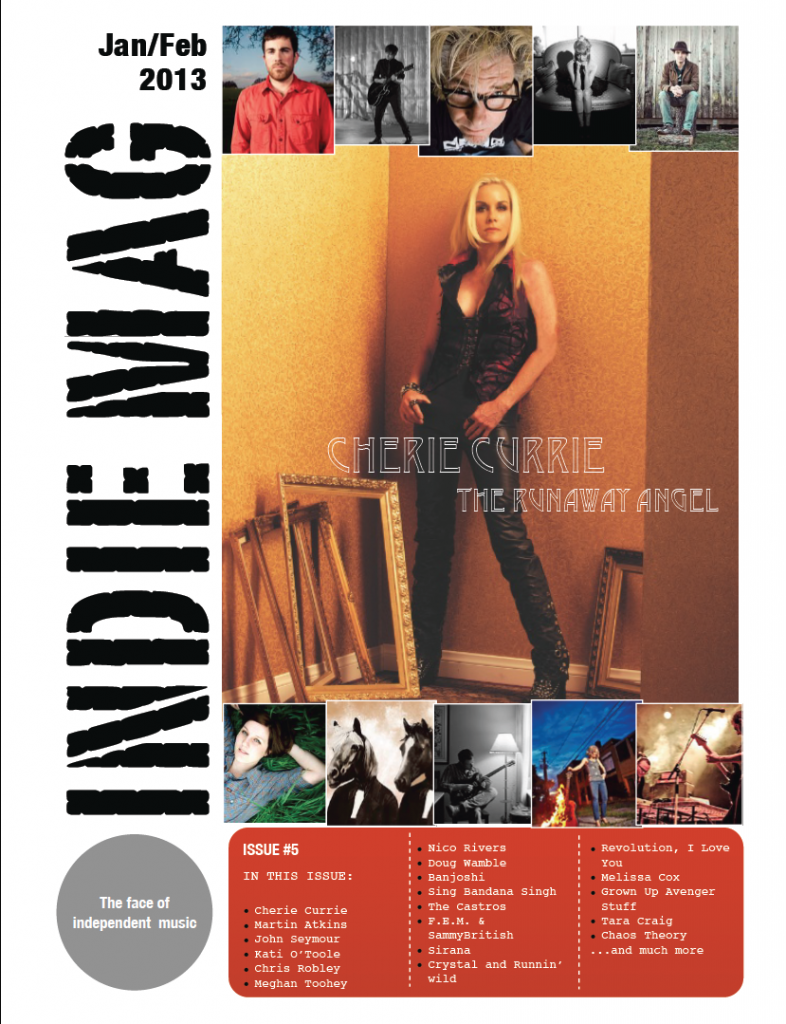 We are excited to be featured in Indie Magazine! Check out Kati’s interview with Editor Reign Lee below!

Kati O’Toole is the ghost in the machine. Behind the virtual wall, she helps indie artists, big and small, realize their musical visions. Heading the production team at Studio Pros in LA, Kati has been at the cutting edge of online music production for years.

She interprets musical ideas like a long-lost romantic language and understands the beating heart of songwriting as only a songwriter could. Armed with an arsenal of some of the best session players in the business, Studio Pros delivers all that it promises and more. I’ve said it before and I’ll say it again…Purists be damned. If you want to make a record, this just might be the option for you. If you want to sit around and talk about making a record, then look elsewhere. Here are Kati’s thoughts on making music in the virtual world…

iM: What does the term ‘independent’ mean to you?

KO: The term independent to me means making things happen on your own. These days, the independent musician has a lot more power and resources to make their songs and productions a reality on their own. Independent is taking the initiative to support your own career. A typical independent musician today is commonly their own album art designer (or at least can find a friend to help), producer, sometimes engineer, songwriter, manager, band leader, publicist, web designer, etc… Independent musicians can now release their own recordings without the support of major labels and record company backing, which I believe is a wonderful thing.

iM: How did you get into producing?

KO: I have always been a musician. I began my interest in music through taking classical piano lessons at the age of 3. My mom is a pianist and it was more her idea that I get into music. To be honest, I didn’t enjoy it as a child. As I grew up, I realized I could use my piano skills as a form of self-expression, and it wasn’t until I started writing my own compositions that I really enjoyed playing. I am a singer/songwriter and experimented a lot with layering vocals and other random instruments in my bedroom recordings on my 4-track starting around 14 years old. I had a realization in high school that one can literally do whatever they want. So I decided I might as well try and make a career out of something that I was passionate about. Music. After that, I began researching music schools and found the Berklee College of Music. The rest is historyJ

iM: How is your role different to that of a record producer in the traditional sense? 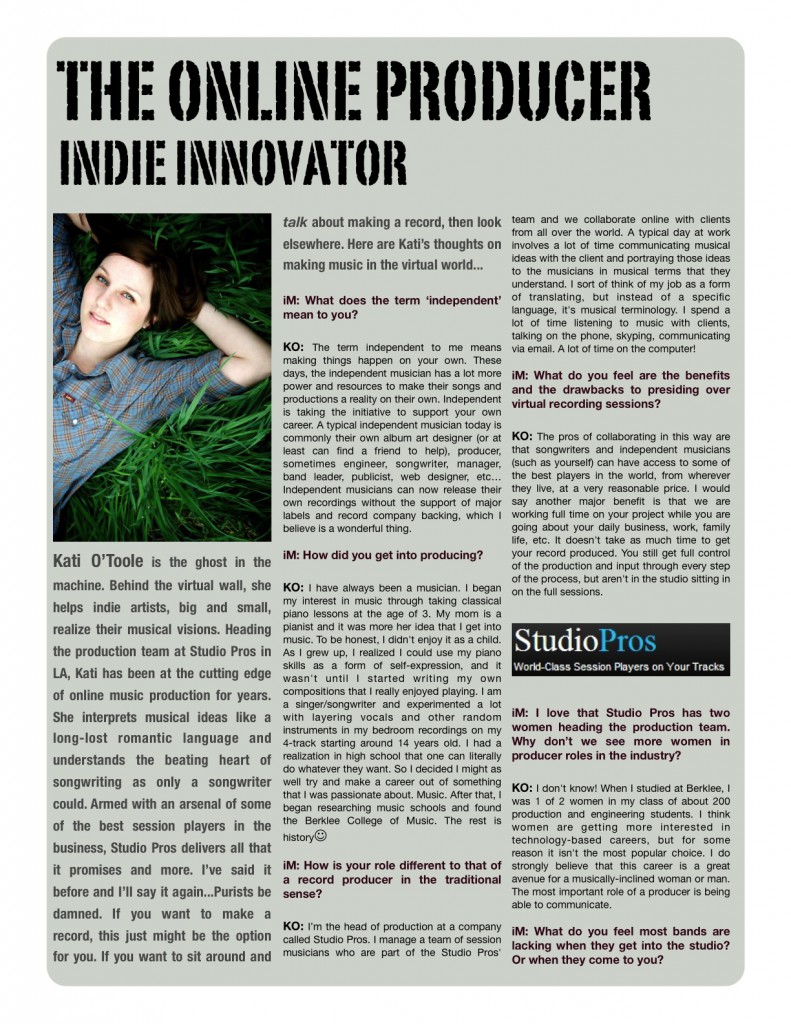 KO: I’m the head of production at a company called Studio Pros. I manage a team of session musicians who are part of the Studio Pros’ team and we collaborate online with clients from all over the world. A typical day at work involves a lot of time communicating musical ideas with the client and portraying those ideas to the musicians in musical terms that they understand. I sort of think of my job as a form of translating, but instead of a specific language, it’s musical terminology. I spend a lot of time listening to music with clients, talking on the phone, skyping, communicating via email. A lot of time on the computer!

iM: What do you feel are the benefits and the drawbacks to presiding over virtual recording sessions?

KO: The pros of collaborating in this way are that songwriters and independent musicians (such as yourself) can have access to some of the best players in the world, from wherever they live, at a very reasonable price. I would say another major benefit is that we are working full time on your project while you are going about your daily business, work, family life, etc. It doesn’t take as much time to get your record produced. You still get full control of the production and input through every step of the process, but aren’t in the studio sitting in on the full sessions.

iM: I love that Studio Pros has two women heading the production team. Why don’t we see more women in producer roles in the industry?

KO: I don’t know! When I studied at Berklee, I was 1 of 2 women in my class of about 200 production and engineering students. I think women are getting more interested in technology-based careers, but for some reason it isn’t the most popular choice. I do strongly believe that this career is a great avenue for a musically-inclined woman or man. The most important role of a producer is being able to communicate.

iM: What do you feel most bands are lacking when they get into the studio? Or when they come to you?

KO: Every project is different, to be quite honest. I think a lot of times independent musicians get overwhelmed by their projects and need help with guidance and keeping focused priorities and organizing what needs to happen when. 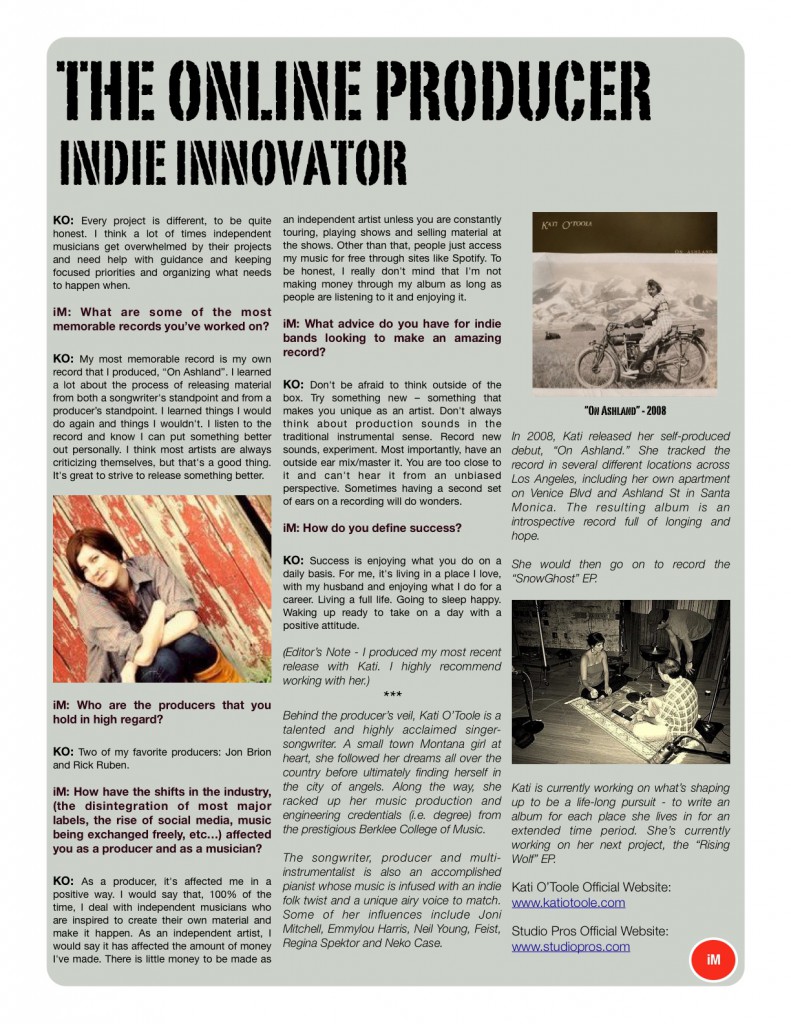 iM: What are some of the most memorable records you’ve worked on?

KO: My most memorable record is my own record that I produced, “On Ashland”. I learned a lot about the process of releasing material from both a songwriter’s standpoint and from a producer’s standpoint. I learned things I would do again and things I wouldn’t. I listen to the record and know I can put something better out personally. I think most artists are always criticizing themselves, but that’s a good thing.  It’s great to strive to release something better.

iM: Who are the producers that you hold in high regard?

iM: How have the shifts in the industry, (the disintegration of most major labels, the rise of social media, music being exchanged freely, etc…) affected you as a producer and as a musician?

KO: As a producer, it’s affected me in a positive way. I would say that, 100% of the time, I deal with independent musicians who are inspired to create their own material and make it happen.

iM: What advice do you have for indie bands looking to make an amazing record?

KO: Don’t be afraid to think outside of the box. Try something new – something that makes you unique as an artist. Don’t always think about production sounds in the traditional instrumental sense. Record new sounds, experiment. Most importantly, have an outside ear mix/master it. You are too close to it and can’t hear it from an unbiased perspective. Sometimes having a second set of ears on a recording will do wonders.

iM: How do you define success?

KO: Success is enjoying what you do on a daily basis. For me, it’s living in a place I love, with my husband and enjoying what I do for a career. Living a full life. Going to sleep happy. Waking up ready to take on a day with a positive attitude.

(Editor’s Note – I produced my most recent release with Kati. I highly recommend working with her.)

Click here to Check out Reign Lee’s Feature Artist Post on our site from the album we produced for her. We’re so proud she’s gone on to start her own magazine. Major Props to Reign!