Tim and Christopher Allen decided to use Studio Pros to breathe a little life into their recordings.  In the end, they ended up getting a bit more than that. 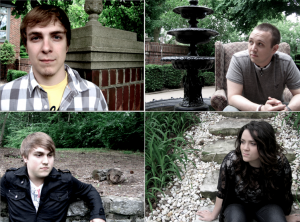 Along with Brad Ackerman (drums) and Kristin Allen (vocalist), Tim and Chris Allen form the band Allenton Hill, who cite influences as diverse as Owl City (on the song “Fireworks,” listen below) and Switchfoot.  “Truthfully, most of our music has been influenced by three main bands: Hillsong, Phil Wickham, and Coldplay,” says Tim, who plays lead guitar, does some singing, and is the principal songwriter of the group.  He’s been playing music with his brother Chris, who sings and plays acoustic guitar and piano, since they were kids.  “When we were young, we were always around music,” Tim remembers.  “Most everyone in my family plays an instrument or two… Eventually the music fever hit Chris and me.”

“Dad always turned up the music when we were driving around and he’d have me pick out all of the instruments,” says Chris.  “This led to me having significant appreciation for the details in music.”

The members of Allenton Hill, all in their early twenties, got together when they began to play at a local Youth Center in their hometown of Dayton, OH in 2006.  They met Ackerman, who has now been playing drums for about 16 years, when he ended up living at their house for a short time.  Although he currently lives in Nashville, Ackerman drives up to Ohio every week to be with the band.

Tim was searching for recording studios on Google when his curiosity was piqued by the Studio Pros website.  “Chris and I payed over a grand for recording at a local studio,” Tim explains.  “We were terribly frustrated with the quality.  Then we threw five grand into recording equipment and built a home studio.  We started to get a feel for recording but we could tell there was something wrong with our music.”

Realizing that their recordings lacked professional mixing and mastering, Tim started researching his options and decided to go with Studio Pros.  “We were impressed with the quality of the services as well as the great pricing offered,” he says.

The Allens handled most of the recording themselves, but turned to Studio Pros when it came time to lay down drum tracks.  “We don’t have the facilities or training to record a drum kit successfully,” Chris admits.  So they had Ackerman record parts on an electronic set, then sent the files to Studio Pros to get a world-class session drummer to reproduce the parts on a professionally recorded drum kit.  “When I heard what he had done, I was very pleased,” recalls Ackerman.  “I said, ‘hey, that sounds like me!'”  Chris agrees: “We were very happy with the performance of the session player that we got.”

Once they had the instruments recorded, they turned once again to Studio Pros to put on the professional finishing touches via mixing and mastering.  “We were looking for someone to take our track and really bring out the details,” Chris explains.  “The staff was very happy to attend to our every request for small, detailed changes.”

The final project lived up to their expectations–even when the bar had already been set high in their minds.  “Our expectation was quite high,” Chris says.  “So I would have to say that we were very much satisfied with the product Studio Pros gave us.  The only real surprise was the absolutely excellent customer service.”

As for their future, Tim and Chris will be sending their music to the top 6 Christian record labels in hopes to take the next step toward making music a full-time gig.  They’re hoping to get some responses from the labels before they take any steps toward making their songs available for purchase, so it may be worth keeping an eye out for Allenton Hill.