Matt Ryd, a Chicago based singer-songwriter who uses Studio Pros to produce his songs and recently licensed his song “Healed” to the TV series Scrubs on NBC.

Check out more of Matt’s music at: //mattryd.com

How did you discover Studio Pros? 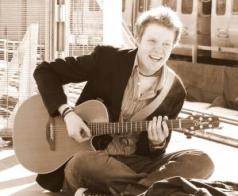 I actually saw a small advertisement and was immediately intrigued. I’m a multi-instrumentalist, so I’ve previously recorded all of the different parts on my songs. But I’m also a huge perfectionist, and the “one-man-band” approach led mostly to a lot of stress and unfinished projects that were never deemed “good enough.” The funny thing is that it’s a lot easier for me to be satisfied with recordings of my songs when there are other people playing the backing parts. And the Studio Pros musicians are extremely talented, so I can feel very confident about handing the reins over to them. It’s nice, because it lets me focus on my singing, my guitar part, and especially the overall feel of the song.

Tell us a little bit about yourself:
I was born and raised in the Chicago-land area (first in the suburbs, then finally moved to the city), and I’m really just a midwestern boy at heart – I can’t walk through a door without holding it for someone else, and I’ve got a total Chicago accent. My two favorite things in life are music and books, so it’s only fitting that I’m finishing a degree in English while continuing to write and record music. I absolutely love this city and got a street performer license just for the fun of busking among the amazing architecture.

How long have you been writing songs?
There’s definitely some home videos of me singing made-up songs at the tender young age of “4-ish.” The first song I remember writing happened when I was 9 or 10, and was called “Riding in the Car with the Ryds” — a first-person narration from the point-of-view of two Beanie Babies that my sister had just purchased.

I first started seriously writing songs in high school. At the time, I only played piano, so I wrote a series of pretty sappy and unfortunate piano ballads. Eventually, though, I picked up an acoustic guitar, and that’s been my primary instrument ever since.

What inspires you to write music?
Everything. My life. Other people’s lives. Stories I read. Cheesy reruns of “Gilmore Girls.” Old movies. Just…everything. I write because I can’t not write.

More than anything else, though, other music inspires me to keep creating. I’ll sit and listen to “The Joshua Tree” or “Revolver” or any great album, and as soon as it’s over, I need to pick up a guitar and start playing. Part of it’s competitive: like an “I want to try to make something like that” attitude. But I think that, really, it’s just that listening to music inspires something in all of us – when you hear a song that really touches you, it connects on a deeper level than almost anything else possibly can. And when that happens to me, I want to turn around and put something else out there to do that to others.

Do you perform your music live?
Absolutely! I can be seen all over the Chicago area, playing anywhere from bars to coffee shops to living rooms to street corners. I love all aspects of being a singer/songwriter, but the live performances are what keep me convinced that this is what I was born to do.