Roger is an extremely inspiring and proactive songwriter with an ever-growing music catalogue. When he’s not saving lives supervising the assembly of pressure relief valves and actuators, he’s writing hit country songs and branding himself as a song-writing powerhouse.

Over the course of a year, Roger has completed 10 full productions with us. Roger would send us a scratch demo of himself singing along to an acoustic guitar and we would take it off his hands, carefully choosing the appropriate arrangements and producing these songs with our full music production package. The recordings feature our talented vocalist Donnie as well as our team of live session musicians. We are thrilled to share his story with you.

Check out the song and video for “Drive To Heaven”, Produced by StudioPros

Turning a Memory Into Song

I got involved with StudioPros when I lost my best friend Buster Julius Combs at the age of 33. I never looked at life as if tomorrow wouldn’t come — I always thought I would live to be an old man and one day retire, but tomorrow isn’t guaranteed. This is what made me pursue recording my music professionally. My music was just me, my guitar and some words in a notebook. I wanted more, I wanted to leave my music behind to my 13-year-old daughter, something she could share with her family long after I’m gone. These songs are filled with memories my daughter Colby could share with her future family. But if I never recorded a song, that notebook would probably end up in a trash can.

I found StudioPros on the internet. I had never heard of any company that offered professional recordings created by professional musicians and producers, so I had this sense of urgency. I called up StudioPros and the rest is history.

The StudioPros process was awesome. The working relationship I had with my producers Kati O’Toole and Ethan Rose blossomed into a friendship. We worked together as a team, we called each other, we emailed each other. I felt the passion they had towards helping me with my music. We all were excited to brainstorm ideas and turn them into radio-ready songs, and I never felt in any kind of a rush to finish my projects because of their amazing patience and attentiveness. They always had special promotions and discounts to give you the best deal possible, so I never felt like I was breaking the bank.

I couldn’t believe I could send in a rough sketch of a song with lyrics and an acoustic guitar track and end up with a professional, broadcast quality recording. They send you previews to listen to for every stage of the production and await your approval before moving on. You even get a free modification for each instrument!  I planned on doing one song and inevitably worked on 10 full productions with these guys. I look forward to recording more songs in 2017.

Working With a World-Class Team of Session Musicians

StudioPros made all my songs sound completely professional — from the vocalists and session musicians, to the producers and the entire staff in general. They all have an incredible attitude about producing your music and their communication is top notch. They even let you break it down to what kind of snare drum you want! The team always valued my ideas and I always turned to them for professional advice. The outcome was a very rewarding collection of songs that will last forever. 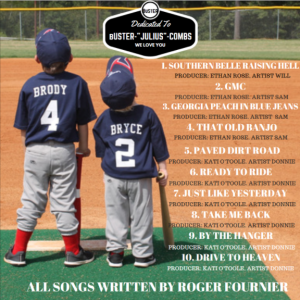 StudioPros offers so much more than just recording songs professionally. They also created the videos to all my songs, which are all currently streaming on YouTube. The songs will be available on iTunes and Spotify as well.  I’m currently in the process of printing 1000 CDs and trying to promote and sell my songs. I sent one of my songs “Drive To Heaven” to a radio station in Georgia. It wasn’t a week later when I got an email saying that my song would be featured on 94.9 the Bull in Atlanta and 96.5 the Bull in Macon, Georgia.

I was thrilled because these stations promote up-and-coming songwriters and artists from Georgia. Songs are then voted on by the public to stay on the air each week. Only 10 artists or songwriters are featured at a time and the longest you can remain on the air is 10 weeks. “Drive To Heaven” was #1 for two weeks, #4 for five weeks and #5 for three weeks. The song charted for 10 whole weeks and this would’ve never happened if I didn’t pick up the phone and call StudioPros. The recording sounded awesome on the radio, just like the artists coming out of Nashville.

The Inspiration behind “Drive To Heaven” and Other Songs

Losing my best friend Buster Julius Combs at the age of 33 inspired me to write this song. He left behind two young boys, Brody and Bryce and a loving wife, Bailey. These young boys didn’t know what heaven was and why their daddy went there and will never come back to play baseball. So this song tells the story that a lot of people who lost a parent at an early age can relate to.

To me, a good songwriter has to live through and experience the stories they share. I get inspired by how I was raised and brought up through life, good times and bad. I’m thankful I had a chance in life to have fond memories of growing up. We never know God’s timing and never question it, so I’m thankful for every day.

When I was in bands back 25 years ago, I had recorded songs in various studios and they would come out O.K. but I was spending a lot of money for studio time and having to set up drums and re-track my bass parts two or three times. All of this excess time added up the hourly studio costs. The prices for recording songs at StudioPros are unreal compared to going into a live studio with a group of friends. You also have access to luxuries like strings sections and so much more for a really good price, which is something you won’t find in the real world.

Get Your Songs Produced By StudioPros

We are offering $50 OFF acoustic productions for our Valentine’s Sale:
https://studiopros.com/valentines-sale/