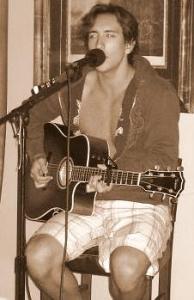 The Studio Pros musicians are still shaking the sand out of their flip flops after working on a music production for talented singer/songwriter Sean Murphy.

Born in Lanikai, Hawaii and later relocating to Laguna Beach, California, you can hear the sound of the ocean in Murphy’s voice and the influences of his laid back beach lifestyle. Sean got in touch with us at Studio Pros and needed to add a more professional edge to the demo of his latest work of art “Dream To Be”.

First finding out about Studio Pros in a recording magazine, Sean took the plunge and sent out his song to the Pros. The studio musicians layed down the backing tracks to support his Jack Johnson-esque vocals which he recorded at his home studio, “I thought the musicians made very creative yet tasteful choices in keeping with the spirit of the song.”

Collaborating with the Studio Pros production team and studio musicians was Sean’s first try at producing his music online, “I actually was very surprised about how easy this was to do, and how great my music has turned out. It is very efficient in comparison to going to the studio.”

Sean didn’t stop at just letting the studio musicians come in and lay down the instrumental tracks, he also turned to our vocalists to compliment his laid back melodies with her soothing backing vocals.

Sean is currently working with a New York based record label, and has continued to work with the Studio Pros on more productions. Keep your eye out for Sean in the future, as he has high hopes of hitting the road with his songs and bringing a bit of sunshine to your town.

You can check out more of Sean’s music at: www.myspace.com/seanmurphyguitar