Ever wondered how a full music production is made?  Here’s the step-by-step process of how Tim Knighton produced his first song. 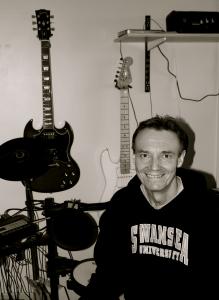 It all starts with an idea.  In Tim Knighton’s case, it was an idea for his original song called “Hail the Woman,” one of many tunes he wanted to record for an album.  “The website was easy to use,” he explains.  “So I picked a track that I knew I’d want to put on the album and thought I’d give it a try.”  Knighton recorded a scratch version of the song and sent in to Studio Pros to kickstart the production process.

When Knighton approved the sketch, that was when the fun began.  Piece by piece, Studio Pros’ world-class session musicians laid down their parts (drums, bass, guitars, keys). Knighton received mp3 rough mix previews after each new instrument was recorded to make sure he was completely happy with the production every step of the way.  With each instrument that was recorded, Tim had a chance to give feedback and make one free modification per instrument to ensure he was happy with the instrumentation as it unfolded.  Once he approved the drums, it moved to bass, then final guitars and keys.

Then came the element that Knighton felt was the most crucial aspect of his song: vocals.  “I’m a big believer that we’re all given certain gifts and abilities,” he says, contemplating his role in the music world.  “And the one I wasn’t given was singing, much to my annoyance.”  But instead of worrying about his own perceived musical shortcomings, he chose to use a professional vocalist provided by Studio Pros to breathe new life into his songs.  After sampling different singers on the Studio Pros website, he decided that Phil (pictured, right) would be the best fit for his material.  “From the first track Phil did, I knew this was absolutely the guy who could make a real difference on my songs,” he says.

With the instrumental and vocal tracks complete, the homestretch of the recording process involved mixing and mastering the song by Studio Pros’ Grammy-nominated engineer.  The final product had taken the song from an idea bouncing around Knighton’s head to a fully realized, professionally polished production in almost no time at all.

From his first song to his first album: Knighton makes his dream a reality.

Now a Studio Pros believer, Knighton decided to use the service for the rest of his album, having Phil sing on 14 songs and repeating the process for an album’s worth of material.  “I’ve been absolutely delighted both with the quality and ease of use of Studio Pros,” he says, “and it’s a good value for the money, as well.  I think it’s an excellent service all around, and I would wholeheartedly recommend it to anyone.”  Knighton’s musical dreams have now been realized because of Studio Pros’ full music production service.

Knighton is from England, but now resides on the coast of Wales (“It’s not quite California, but it’s very nice,” he quips about his current hometown).  As a kid he played guitar in local cover bands, but always enjoyed writing songs.  Inspiration for his tunes have come from myriad sources, from the brass arrangements of Glenn Miller to the pop arrangements of Quincy Jones on Michael Jackson records.  But One of his biggest influences has been Led Zeppelin.  “Jimmy Page is one of the best guitarists ever,” he says.  “But not only that, there’s also a lot of acoustic.  That is the sort of contrast I have on the album, a mix of rock numbers and also some softer acoustic numbers.”

Once the album is complete, Knighton has grand plans for using his music to do some good in the world.  Noting that a friend of his recently lost a child to leukemia, he is planning on using proceeds from his music sales to rase money for UK charities benefiting children with the same illness.