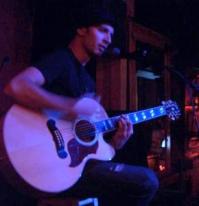 Mark Sadek Ricotta is a man of few words, but when it comes to songwriting he doesn’t hold anything back. Studio Pros just recently did a music production for Ricotta and got in touch with him to get to know the man behind the song.

How long have you been writing songs?

“I’ve been writing since I was in junior high. I started playing guitar when I was 6 or so. I wanted a toy guitar when I was little out of curiosity and got a few lessons and that’s was about it really. I’ve been playing ever since.

Do you have any major influences in your music and songwriting style?

“My major influences would probably be early 90’s rock, a lot of classic rock, as well as cheesy pop music (it’s the truth). I take a lot from listening to the hooks in pop and applying them to my songwriting.


Have any particular bands or artists influenced your songwriting style?

“The biggest influences for me are Nirvana, Sound Garden, Led Zepplin, and the Beach Boys, and Sheryl Crow.

Where are you from?

“Originally, I was born in Greece, and then after that I was in Montreal. My parents were over in Greece for work, they were doctors, it’s a long story. Now my family lives in New Jersey. I’m currently living in Hollywood performing solo around the LA area and recording my songs.

Now You’re in LA. Has Los Angeles influenced you in any way as far as your song writing?

“I would say it has changed my songwriting because I’ve had to do a lot of acoustic shows since I’ve moved to LA, so I’ve been forced to write stuff that works acoustically. Playing solo has changed.

And you got a degree from the Berklee College of Music in Boston, right?

“Yes. The reason I went to Berklee is because I was already a musician and I didn’t really have much of a choice of where to go. I wasn’t really doing well in high school and so it was pretty much by default that music was what I was supposed to do. I studied Music Production and Engineering at Berklee and learned about recording techniques and production.

Do you record yourself now?

“I recently finished putting together a vocal recording studio in my apartment in Hollywood. I bought an isolation booth so I can practice and record vocals. My neighbors were getting fed up with me recording at my apartment here, so I had to do something about it.

You just recently finished up a Studio Pros music production service. What did you think about having your song recorded online? Was it something you had ever considered?

“I had never heard of getting songs produced online before Studio Pros. I had heard of exchanging ideas, but never meeting studio musicians online to play on my stuff.

Would you recommend it to others? Why?

“Yes. In my situation I would recommend this music production service to people who have an idea for a song that’s meant to be played with a full band. In my case, I wasn’t able to execute my ideas without outside help or record them because I didn’t have a full line of musicians. With Studio Pros you can get it all done in one place without having to rehearse them and deal with going into a studio and recording yourself.