Andy Kostek doesn’t let a job that keeps him away from home stand in the way of recording the professional album he always wanted; with Studio Pros, he can record while on the road. 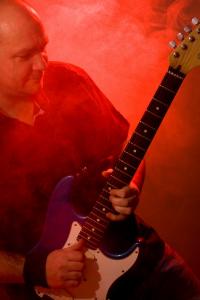 Over a Pink Floyd-esque bed of electric and acoustic guitars, Andy Kostek’s voice adds a distinct quality to his music that goes far in defining his signature sound. “I never really considered myself a vocalist, just a guitarist,” Andy says. “With the help of Studio Pros, I’ve become more confident with the vocals.” Living in Ireland at the time, Andy came to Studio Pros to help him craft his songs when the travel demands of his job made it nearly impossible to put together a band of his own. “Using Studio Pros was born out of frustration,” he explains. Having a “virtual band” allowed him to write lyrics while he was on the road, while professional studio musicians were laying down tracks for him thousands of miles away.

Andy came from a musical family, and by age 15 he got his hands on a discarded guitar with only three strings on it. Despite only being halfway to a complete instrument, Andy “never looked back.” By the time he was 18, he bought his first electric guitar; three months later he was making more money playing music in a band than he was from working for an aircraft manufacturing company as his day job.

But while music helped pay the bills and put food on his table, Andy was faced with choosing between a career in the corporate world and a career in music by the time he hit his late 20s. “I kinda chose the safe route,” he admits. But his love for music never left him, and eventually he decided to record an album by playing every instrument himself, including guitar, drums, keys, bass, and vocals. Realizing that the songwriting and guitar playing were the only elements of the recording he genuinely enjoyed, Andy turned to Studio Pros to give his music the professional edge his debut album was missing. Rather than trying to master each instrument on his own, it allowed him to focus on what he does best: songwriting.

The process was simple: Andy would demo his songs by playing the instruments himself, then turn it over to Studio Pros to to see what world-class session musicians could bring to his music. “I had a fairly well-written song in a complete format,” he says of the recording process. When he heard the interpretations of Studio Pros’ studio musicians, his music had been taken to the next level. “It helped the song feel more fresh to me.” 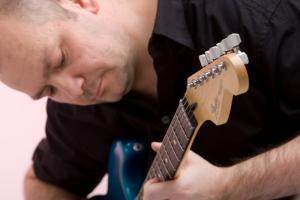 Using the results to help himself break out of his own musical mold, Andy received both inspiration and professionalism from Studio Pros‘ players. “The end result was much more polished,” he says. “There was no comparison. I absolutely love the quality and standard of musicians.” Andy also appreciated that he didn’t have to compromise anything in regard to musical ability and direction like he might have had to with his own band. “You have a far larger say in the production.”

While Andy admits to having to tackle a slight learning curve when trying to work with musicians halfway across the globe, he soon came to appreciate the new perspectives and rapid turnaround time for his tracks. “It was really refreshing to have someone else’s viewpoint,” Andy says. “It was a very pleasant and trouble-free process. Having a real keyboard player who knew his instrument, the point of view he came across with was very different from mine.”

Andy’s plan for the tracks he got from Studio Pros? Between these tracks and some that he’s been working on by himself, he has enough material to release another two CDs over the next few months to add to his 2008 release, One by One. With some industry interest brewing and one of his Studio Pros songs gracing the airwaves of BBC Radio, Andy’s revival of an old hobby is now becoming a much more serious undertaking. “I don’t see this stopping,” he predicts.

Listen to more of Andy Kostek’s music at his Myspace: //www.myspace.com/andykostek