Emily Russo is a Boston based diva on the rise who just recently finished a Studio Pros Music Production Service.

Listen to the production of her song “The Price of Letting Go” step-by-step with the Studio Pros process: 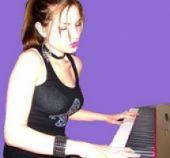 Step 3: Laying down a bass groove

She has been playing piano since she was five years old, and started songwriting when she was fifteen. She is currently attending The Berklee College of Music in Boston where she is studying songwriting.  Emily draws her inspiration for songwriting from many different walks of life – both her own and other people’s. She worked with us on her song “The Price of Letting Go” and kindly answered some of my questions about her experiences with Studio Pros…

Who would you say are some of your main influences?

The Beatles for sure, but also oldies, motown, and old school metal. I’m not really influenced that much by today’s modern music.

Tell me about your experiences working with Studio Pros.

Honestly, it was great. The track sounds amazing! I was very impressed that they didn’t need a lead sheet or anything like that, they just took my song, and recorded it and arranged it, and it was ready to go!

What was your inspiration behind the track you did with us? And inspiration for your music in general?

Well it was a mix between my grandfather passing away, and how that made me feel, and then it was also about one of my best friends who passed away last year. It was nice to be able to have an outlet to express the emotions I felt as a young girl, as well as how I feel as an adult. And as far as inspiration in general, you never know when it’s going to strike. Last night for example, I was in the kitchen, and I just got inspired, and I went to the piano and had to write a song right then and there. It’s rare that I’ll actually have the patience to sit down and schedule time to write songs, usually it’s just when the inspiration strikes me that I’ll write.

Did you have a particular sound in mind for your song “The Price of Letting Go”, or did you leave the production to the players at Studio Pros?

Had you ever heard of recording online before?

Did you have any reservations about recording online?

Was it an easy process for you?

Yes, it was very easy and I was able to have talented session players produce my song without having to leave Boston.  What more could I ask for?

So there you have it, we loved working with her, and we hope to do so again some time in the future.