20 years ago she thought making music might be fun. Now with the help of Studio Pros, Barb Bechler has accomplished what she never thought possible. 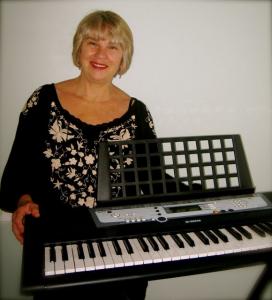 UPDATE: Barb has created dance/hip hop tracks from a capella demo versions to professional final products with the help of Studio Pros.  Three of these tracks have been added below.  She has also won two more songwriting awards in the Song of the Year competition for her tracks “Come on Out and Dance” and “Wishers” since this feature was written.

Barb Bechler’s path to becoming a musician is not your typical story. In fact, her creative use of Studio Pros’ services makes for one of the most unique musical journeys you’re bound to hear. While she’s been a fan and admirer of music for most of her life, Bechler never was a musician herself–until she began learning, experimenting, and expanding her musical boundaries with the help of the world-class studio musicians that Studio Pros provided. Utilizing Studio Pros’ services, Bechler found herself going from complete novice to award-winning songwriter in an astoundingly short period of time.

Not too long ago, Bechler was retired from real estate sales and writing children’s stories. Now, she is submitting her music to TAXI for publishing in film and television. “I’m probably coming from a different direction from a lot of people,” she says. “I’ve always admired musicians and listened to a great variety of music. The big thing for me was that I always wanted to be able to write songs.” Wondering how she could translate her story writing abilities to songwriting, Bechler had a breakthrough when her niece, Deanna, showed her how to use GarageBand music software.

“I had a Mac with GarageBand and just assumed it was a kid’s game, so I never opened it up,” Bechler admits. “I just went, Oh my goodness, I want to be able to do that!” She compares the process to another one of her talents: collage art. “The lightbulb went on when she showed me how to cut, rearrange, and paste music together.”

After her epiphany, Bechler went home and obsessively put together loops for hours on end. Immersing herself in her new passion, she began researching song construction and studying various musical genres. After getting some music in place, Bechler moved on to the lyrics, which presented a brand new test for her: melody. “I’m not a singer, so it was a challenge to figure out the melody,” she explains. “Studio Pros told me to talk the words into the song.” So Bechler spoke lyrics into a microphone to provide the rhythm, flow, and cadence. Studio Pros’ musicians took care of the rest, turning the music loops into real tracks played by real professionals and transforming the spoken word into melodies performed by session singers.

Bechler honed the process to write and produce music that was ideal for publishing opportunities on film and TV. Her song “For Chelsea” began as an idea comprised of jazzy music loops when it was passed over to Studio Pros. Session musicians then provided a jazz combo backing a live trumpet lead and transformed Bechler’s musical vision into a TV-ready reality. “The final version was a professional rendition of my tune,” she says.

“Although I’m just starting out as a musician, I have a very good ear for music, a good ear for timing and rhythm,” Bechler says. “Studio Pros really helped me understand how many bars it takes for a really good bridge, or to create an intro or an outro. They’ve been really helpful with arrangement and song construction.”

Not only have Bechler’s online collaborations with Studio Pros yielded songs spanning genres including pop, jazz and classical, she has been receiving rave reviews as well: she was the winner of the Song of the Year monthly award in Adult Contemporary for the month of April for her track “Beyond the Sea.” Crediting modern technology and services such as Studio Pros for making the impossible possible for her, Bechler has gone from music enthusiast to industry insider and is putting full-time hours into her latest hobby. “I was surprised that the prices were reasonable, that they were quick with the turnaround, and with how much actual hands on help I got,” she says.

Now taking piano lessons to sharpen her skills, Bechler has only begun her musical career that Studio Pros helped launch.